The following answer is by Michael L. Best from Quora.

Michael, take it away…

Oris may not be the most respected nor beloved watch brand to come out of Switzerland, but I’ve always thought that it has an interesting story within the history of watchmaking. But beyond that, it’s also my personal favorite brand as it was the one that got me truly interested mechanical timepieces.

For those unfamiliar with Oris or its history, the company was started in 1904 in the Swiss town of Hölstein, which is still the location of their headquarters. While nothing about their watches seemed to stand out initially, in the late 1930’s, the company would some up with what many now regard as its trademark spec: the pointer date. Designed for their pilot watches, it was a very interesting approach to making the date function stand out a bit. The pointer-date function was reintroduced in the late 80’s and has been an Oris staple since. 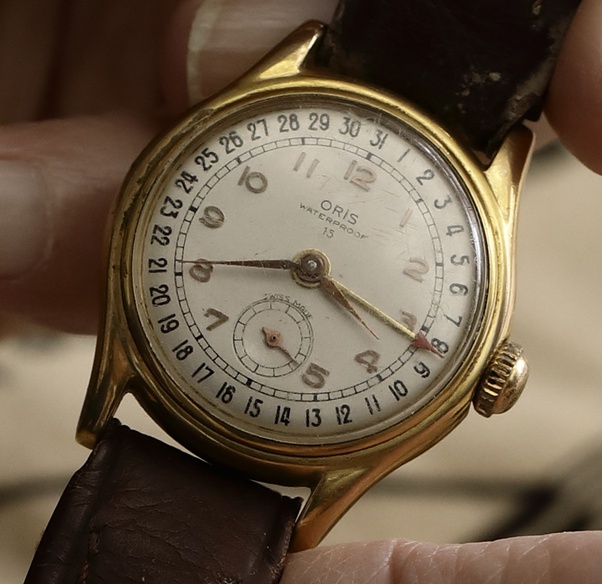 In its own way, Oris has also made a splash in the industry by breaking convention and forcing rules to change. Early on, the company utilized pin-pallet escapements for their movements which most other companies panned as inaccurate and cheap compared to the more popular detached-lever escapement. Swiss law also made it very difficult for Oris with the Watch Statute of 1934, which essentially blocked watch companies from adopting technologies they hadn’t been using already. This law meant that Oris was unable to adopt the lever escapements that would allow it really compete with other watchmakers. 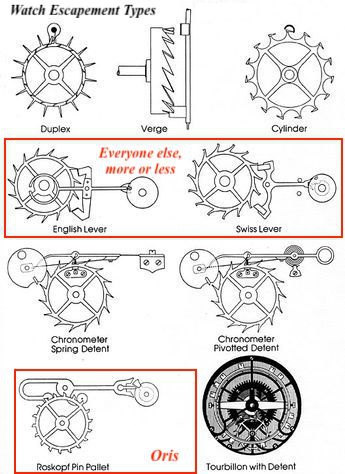 So what did Oris do? It rolled up its sleeves and got to work. Over the next few decades, they hired a legal team to focus on getting the Watch Statute overturned. In the meantime, they focused on making their pin-pallet based movements as reliable as possible, earning several distinctions for accuracy in the 1940’s. This in many ways vindicated their use of the pin-pallet escapement and silenced their detractors. In 1966, Oris finally succeeding in overturning the Watch Statute, allowing them to finally utilize lever-based escapements in their movements as well as allowing all other companies to adopt new watch technologies without restriction. Only two years later, Oris produced its first calibre with a lever escapement (the calibre 652) which was awarded a chronometer certification.

But like many watch companies at the time, Oris soon saw a downturn in their fortunes. In 1970, Oris was acquired by ASAUG (now known as the Swatch Group), and from there it seemed that the company was destined to fade into obscurity with the concurrent rise of the Quartz Crisis. The early 1980’s was around the peak of the crisis, when many watch companies were either closing down, merging to survive or adopting quartz to keep their competitive edge. Around that same time, Oris did two things that were quite remarkable. First, its managers led buyout from ASAUG in 1982, making it independent company once again. Second, in 1984, the chairman of Oris SA made the deliberate decision to completely abandon quartz technology in order to focus mechanical based watches instead. In essence, Oris was doing the exact opposite of what everyone else was.

Today, Oris SA remains one of the relatively few independent Swiss watch companies left and and one of the even fewer that does not produce any quartz or battery powered watches. Though its time in ASUAG made Oris reliant on third-party movements such as ETA and (I think as of 2011) Sellita, in 2014 the company once again began to produce its own in-house calibre’s with some very impressive specifications.

Apologies for the history lesson, and I’ll get to the point. Although its history is far from revolutionary, Oris is very much a company that has grown in the face of any challenge that it’s been confronted with while marching to the beat of its own drum. I love the company very dearly for that. In my own very small collection, I own only one Oris; a lovely little Artelier that took some vintage art deco styling and married it with modern sensibilities. But I’ve been thinking about the next step in expanding my collection and I’ve become increasingly interested in vintage watches. 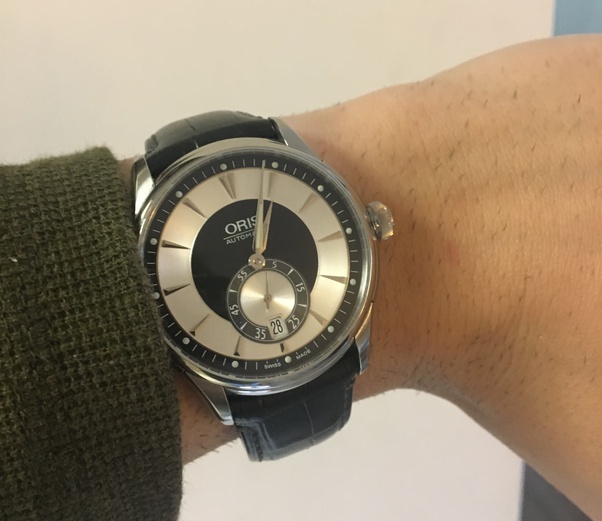 My Oris Artelier Small Second Date, a modern watch with some vintage inspiration. This was my first “grail watch.”

I think people approach vintage in a lot of different ways, with some looking for very specific, prolific models and others disregarding whatever name is on the dial and just choosing whatever speaks them. As I’ve begun to considered my approach to vintage, Oris’s story keeps popping into my head and I just think “I’d love to have a piece of that history.” Thus, I’ve decided that if I am going to search in earnest for a vintage watch, I’m going to be searching for either a vintage pointer date or a model powered by either their calibre 601 or 652. Unfortunately, there are many “Frankenwatches” pretending to be vintage Oris, making my search a little more complicated. Though I know what I’m looking for, the large presence of fakes will force me to be a bit cautious, likely making my search longer.

So although I don’t have a vintage timepiece of my own to share with all of you, I thought it might be fun to share this part of my story: the inspiration and the search. Hopefully, I’ll find the piece I’m looking for and, when I do, I hope to give you all a follow up on that. Also, if anyone has any advice for me on my search, I welcome that in the comments section.